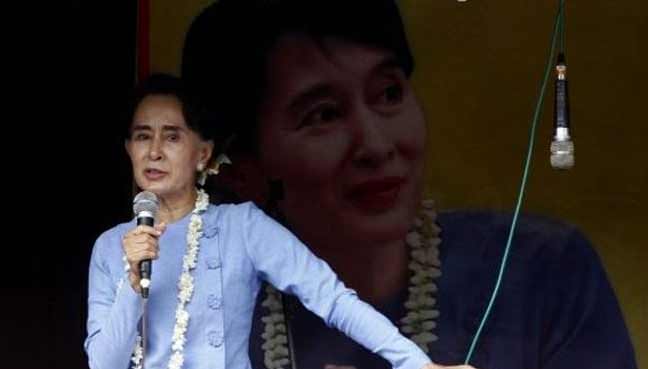 THANDWE: Myanmar’s Aung San Suu Kyi will campaign with a hundreds-strong security force in Rakhine state Friday, her opposition said, as she risks a rare brush with hostility by taking her election bid to the volatile region.

The opposition leader, who is criss-crossing the former junta-run nation as she vies for victory in landmark November 8 polls, may face a mixed reception in western Rakhine, where Buddhist nationalists accuse her of supporting maligned local Muslims.

“Security will be very tight. We are going to use more than 1,000 people for security.

We are worried and taking precautions because we do not want any problem,” said Win Naing, chairman of Suu Kyi’s National League for Democracy in the town of Thandwe.

Concerned officials had “negotiated” in the region for a peaceful trip, he said, adding that many local people would like to “welcome her warmly”.

Suu Kyi has opted to skirt state capital Sittwe and other more hair-trigger areas of Rakhine, which remains deeply scarred by two bouts of communal unrest between Buddhists and Rohingya Muslims that erupted in 2012 and left more than 200 dead.
Most of the 140,000 people displaced as a result of the bloodshed and arson are Muslims.

They remain trapped in miserable camps or have attempted to escape on rickety boats in a desperate exodus from Myanmar that has swelled in recent years.

While Suu Kyi has faced international disappointment at her reluctance to speak out in support of the Rohingya, she is viewed with suspicion among Rakhine hardliners who see her as supportive of Muslims.

During a recent interview with India Today the Nobel laureate defended her reticence, saying “flaming words of condemnation” were the wrong way to achieve reconciliation.

Tensions are spiking in the Buddhist-majority country as it heads towards the elections, which many hope will be the freest in generations for the former pariah state.

Suu Kyi has accused her opponents of using religion — and the rise of a powerful nationalist monk-led movement — as part of their political campaigns.

She will fly into Thandwe — the gateway to Myanmar’s upscale nearby beach resorts — which was quiet early Friday with some NLD flags draped outside houses and hotels.

The 70-year-old will begin her two-day Rakhine campaign with a rally at Taunggote, some 45 miles (70 miles) away, one of the sites of violence that triggered the 2012 unrest.

Since then periodic bouts of religious bloodshed have overshadowed Myanmar’s reform efforts as it begins to emerge from the grip of outright military rule under a quasi-civilian government, which came into power in 2011.