San Francisco One Of Few US Cities With Marijuana Lounges 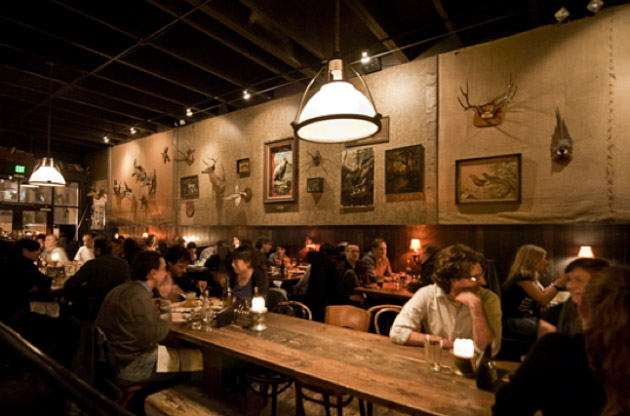 SAN FRANCISCO — The smoke was thick and business brisk at the Barbary Coast Dispensary’s marijuana smoking lounge, a darkened room that resembles a steakhouse or upscale sports tavern with its red leather seats, deep booths with high dividers, and hardwood floors.

“There’s nothing like this in Jersey,” said grinning Atlantic City resident Rick Thompson, getting high with his cousins in San Francisco.

In fact, there’s nothing like the Barbary Coast lounge almost anywhere in the United States, a conundrum confronting many marijuana enthusiasts who are finding it increasingly easy to buy pot but harder to find legal places to smoke it.

Only California permits marijuana smoking at marijuana retailers with specially designed lounges. But it also allows cities to ban those kids of shops.

Unsurprisingly, San Francisco is the trailblazer. It’s the only city in the state to fully embrace Amsterdam-like coffee shops, the iconic tourist stops in the Netherlands where people can buy and smoke marijuana in the same shop.

San Francisco’s marijuana “czar” Nicole Elliot said new permits will be issued once city health officials finalize regulations designed to protect workers from secondhand smoke and the neighborhood from unwelcomed odors. The lounges are required to install expensive heating, ventilation and air conditioning systems to prevent the distinct marijuana odor from leaking outside.

Other California cities are warming to the idea. Oakland and South Lake Tahoe each have one smoking lounge.

The city of West Hollywood has approved plans to issue up to eight licenses; the tiny San Francisco Bay Area town of Alameda said it will allow two; and Oakland and South Lake Tahoe each have one lounge. Sacramento, Los Angeles and other cities are discussing the issue but have not authorized any lounges.

Jackie Rocco, the city of Los Angeles’ business development manager, said residents and cannabis businesses complain there is “no safe place, no legal place, to use it.”

Rocco said Los Angeles officials envision smoking lounges set up like traditional bars, but for now the idea is more concept than plan.

Meanwhile, lawmakers and officials in other states are dithering over the issue.

Massachusetts marijuana regulators considered approval of “cannabis cafes.” But the proposal came under withering criticism from Republican Gov. Charlie Baker’s administration and law enforcement officials, who claimed among other things that opening such businesses would lead to more dangerously stoned drivers.

The five-member Cannabis Control Commission ultimately yielded to pressure by agreeing to put off a decision on licensing any cafes until after the initial rollout of retail marijuana operations, expected this summer. Members of the panel, however, continue to support the idea.

“Those who wish to consume cannabis are going to do so whether social sites exist or not, and are going to make driving decisions regardless of where they consume,” said Jim Borghesani, spokesman for the Massachusetts chapter of the pro-legalization Marijuana Policy Project. “Social sites will simply give cannabis users the same options available to alcohol users.”

In Colorado, one of the first states to broadly legalize, lawmakers failed in a close vote to make so-called “tasting rooms” legal. However, cities may do it, and Denver has authorized lounges where consumers bring their own marijuana, issuing a single permit so far.

Nevada has put off a vote on the issue until next year, while lawmakers in Alaska and Oregon have considered and rejected legislation.

San Francisco has allowed medical marijuana patients to smoke in dispensaries for years, though there was uncertainty over whether the practice was authorized when California voters in 1996 made the state the first in the nation to legalize cannabis use with a doctor’s recommendation.

The Barbary Coast, which received its state license in January, first opened as a small medical dispensary in 2013. It expanded and opened its smoking lounge to medical users last year. On Jan. 11, the shop opened to all adults when it received its California recreational use license. The state started issuing those on Jan. 1 and continues to approve dozens of applications a month since voters broadly legalized the use and sale of marijuana.

Thompson traveled from Atlantic City to celebrate his 27th birthday with his cousins, who live in Oakland. They decided to celebrate in style, getting as high as they could in San Francisco.

The three 20-somethings bought a variety of buds and the quick-acting “wax,” a potent pot concentrate, and settled into a booth with all the accoutrement they needed. After customers purchase at least $40 worth of product, the Barbary Coast will supply bongs, joint rollers, “rigs” for wax smoking and just about any smoking tool desired.

They smoked and debated the merits of smoking buds versus wax. The verdict: There’s something innately satisfying about smoking buds, but wax gives a quicker high even if it requires a hotter flame and more elaborate setup to smoke.

Barbary is in a once-rundown neighborhood that is gentrifying. Two other dispensaries with smoke lounges are three blocks away. Three flat-screen televisions tuned to sports hang on the lounge’s brick walls. Outside the enclosed room, customers line up at the dispensary’s glass counters to buy marijuana.

General manager Jesse Henry said Barbary’s owners plan to open a bigger store and smoking lounge about a mile away, across the street from a popular concert hall, after city health officials finalize regulations for on-site consumption.

“This city is built for tourists,” Henry said. “We put a lot of work into giving them a San Francisco experience.”