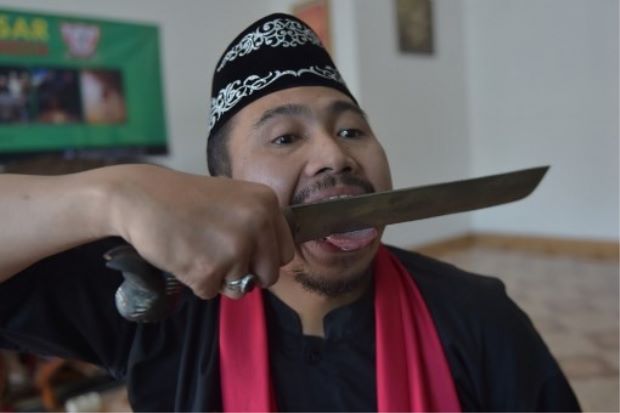 Mulyadi pounds a nail into his nostril, leaving it embedded in his face, horrifying a group of slack-jawed spectators of debus, an Indonesian tradition blending martial arts with grotesque self-injury.

Some of his audience may have had enough, but Mulyadi isn’t done yet.

As hypnotic drum-and-flute music plays in the background, he produces a bowl full of nails and appears to stuff a fistful of them into his mouth, swallowing like a champion speed eater. He opens his mouth and sticks out his tongue for any doubters left in the room.

Many outside superstitious Indonesia would write off the Javanese art as all smoke-and-mirrors — and sleight of hand undoubtedly plays a part. But practitioners insist it is divine intervention that keeps them from a trip to the hospital.

“Debus is real, with real blood and real machetes. There are no tricks,” says Mulyadi, 50.

He declines to say how his body can supposedly process — and expel — the nails, calling it a “secret”.

“They may come out in a few days or they may stay in there, depending on my mood,” he laughs.

Debus was born in the 16th century during the reign of the first sultan of the Banten kingdom, who exploited its claims to invincibility to galvanise opposition against Dutch colonisers and to spread Islam — although the tradition’s historical links to religion are still hotly debated.

Once a favourite at weddings and other celebrations including — improbably — circumcisions, debus starts with a series of martial arts moves and prayers to the heavens for protection from injury.

Debus master Aris Afandi puts it to the test as he goes at a fellow fighter’s arm with a machete, although his foot pounding and yelling seems to have more impact than the cut.

Afandi chants a prayer and wipes some blood from his comrade’s arm to reveal what appears to be only a minor injury.

“When we are chanting the prayers, our bodies are blanketed by an invisible, subtle energy that gives us protection,” he told AFP at a training centre in Bandung, 150 kilometres (90 miles) south of Jakarta.

Not to be outdone, another fighter lowers a blunt-ended power drill onto his tongue while another walks on bamboo thorns before rolling in them.

Nearby, a sledgehammer crashes into the end of a large stick that appears to be pressed against a fighter’s stomach, eliciting a howling cry.

Onlookers aren’t sure whether to snap pictures or look away.

“I have goosebumps because it’s so extreme,” said Rohana Rosdiani, a 37-year-old spectator.

“They ate nails and drilled their stomach as if they’re building a house. I can imagine how painful it is if you just cut your skin a bit, let alone pierce and puncture it.”

The Banten provincial government is trying to revive interest in the fading tradition, hosting an event last year that featured more than 5,000 fighters — a record.

But the future of debus is not guaranteed, as poor pay dissuades many newcomers from taking up the gruesome business full-time.

“Fighters are in it for the passion…. You can’t make ends meet by performing debus,” Afandi said.

Some Muslim clerics say the tradition is haram, or forbidden, on account of its links to supernatural beliefs, which are common across the vast Southeast Asian archipelago — also the world’s most populous Muslim-majority nation.

Some fighters have been seriously injured in the past, and last year a group of men were hospitalised after they rinsed their hands in acid, following an instruction from a self-described debus master who claimed he could make them indestructible.

“The higher one’s devotion to god, the stronger the energy,” he added.

“That energy turns into a mess if someone hesitates.” – AFP